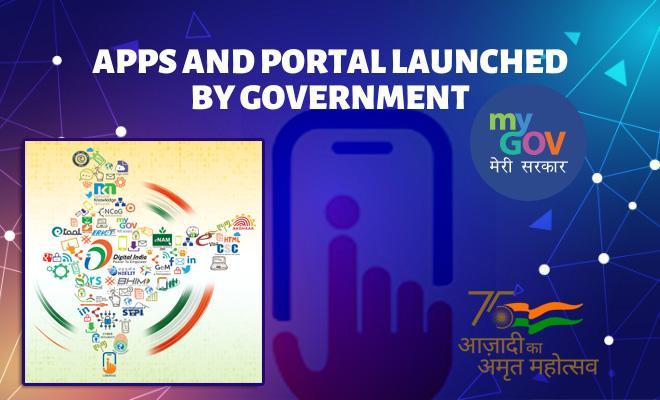 App and Portal launched by Central or the state government many easy access or the service for the schemes which they launch. These apps and portals by the government make it easy for them to successfully distribute the service to the beneficiary citizens.

With the increasing awareness of the technology, it has made it possible for every citizen to know about the various schemes that are launched for them. It has been seen that every month or other the government launches apps along with the schemes.

As in the current affairs section of the competitive exams. The schemes launched by various governments are asked, in the recent days a trend of the Apps or the portals related to those schemes have been asked. So we have tried our best to list together all the important Apps and Portals that are launched by the Central, States or the other government organisation.

NIDAAN portal:(National Integrated Database on Arrested Narco-offenders).It was developed by the Narcotics Control Bureau of India. In this portal a database will be created of all the narcotics offenders arrested. It will be useful for the state and central investigative agencies to track their activities.

Gati Shakti Sanchar Portal : It was launched by the union telecommunication minister Ashwini Vaishnaw. This portal has been developed under the National Broadband Mission, which has an aim of providing  broadband infrastructure to every citizen. It will provide the access to broadband services across the country, especially in rural and remote areas.With the help of this portal, the telecom department will speed up the process of laying fibers and tower Installation for the 5G rollout.

Rashtriya Puraskar Portal : The union government of India has launched this portal “Rashtriya Puraskar portal” to bring all the Awards given by India under one platform. It will allow every citizen to nominate individuals for various awards. This platform will ensure transparency and public partnership in the voting for the various awards.This Portal intends to make it easier for the public to propose people and organisations for various prizes given out by the Indian government.

SAMBHAV Portal: Uttar Pradesh Minister for energy and urban development Arvind Sharma has launched the SAMBHAV (Systemic Administration Mechanism for Bringing Happiness and Value) portal for disposal of public grievances and monitoring programmes and schemes of the two departments in Uttar Pradesh.

FASTER portal: This portal was launched by the Chief Justice of India, N.V. Ramana. FASTER mean’s Fast and Secured Transmission of Electronic records. This portal will help courts to send e-authenticated copies of bail orders, stay orders, interim orders and proceeding through secured electronic communication to duty officers at prisons.It will fasten the process and help the petitioner to get bail, and other orders from the courts.

PM-DAKSH (Pradhan Mantri Dakshta Aur Kushalta Sampann Hitgrahi). It was launched by the ministry of Social Justice and Empowerment. This portal was launched so that the skill development schemes can be accessible to the target groups-Backward Classes, Scheduled Castes and Safai Karamcharis.

Under this scheme eligible target groups are provided with the skill development training programs on Short Term Training Program.

Parishodhan Portal :The Online Portal was launched by the Jharkhand Government,to fasten and simplify the process of document rectification related to one’s land.

Yuktdhara Portal :The Union Minister of State (Independent Charge) for the Ministry of Science and Technology, Jitendra Singh launched a new Geospatial Planning Portal under Bhuvan named “Yuktdhara” to enable the planning of new MGNREGA assets using Remote Sensing and GIS-based information. To facilitate the new MGNREGA assets like farm ponds, dams, plantation, roads, playgrounds etc. through remote sensing and geographic information system (GIS) as per the data feed into it.

The portal has been jointly developed by ISRO and the Ministry of Rural Development.

‘MyGov-Meri Sarkar’ Portal:  This portal was launched by the Chief Minister of Uttar Pradesh Yogi Adityanath.The portal will help the state government to get feedback from the people and also to offer information to the people about the various government schemes.

SAGE (Seniorcare Aging Growth Engine): This Programme and its Portal was launched by Union Minister of Social Justice and Empowerment, Thaawarchand Gehlot. The portal will be a ‘one-stop access’ of elderly care products and services by credible start-ups.

PM SVANidhi portal PM SVANidhi scheme and portal was launched by the ministry of Housing and Urban Affairs, for providing affordable loans to the street vendors of Rs 10000 during the pandemic.

CHAMPIONS Portal: It was launched by the Ministry of Micro, Small and Medium Enterprises (MSME), To assist Indian MSMEs march into the big league as National and Global CHAMPIONS by solving their grievances and encouraging, supporting, helping and hand holding them.

e-Sachivalaya portal : This portal was launched by Haryana Chief Minister Manohar Lal Khattar . It will  help people in taking online appointments for virtual meetings with the chief minister, deputy CM, other ministers and heads of various departments.

E-NAM Portal This portal was launched by Ministry of Agriculture, Government of India.It is the e-market place of the farmers, to reach out to the last mile farmer and transform the way agricultural produce is sold.

Saubhagya Yogana and portal  This scheme and portal was launched by the Government of India.The web portal aims to ensure transparency as well as accelerate household electrification in rural as well as urban areas in the country.

Saubhagya Scheme or Pradhan Mantri Sahaj Bijli Har Ghar Yojana is an Indian government project to provide electricity to every house of India.

E-Dharti App And Portal : It was launched by the Ministry of Housing and Urban Affairs, Shri Hardeep Singh Puri. It will provide all the three modules Conversion, Substitution and Mutation related to properties online. This portal will have the certificate details and outline map of the property which can be easily accessed with this app. It will help avoid unnecessary litigation and also this portal will help a purchaser to learn about the details of the property whether any lawsuit is pending in respect of the property or not.

SWAYAM (Study Webs of Active–Learning for Young Aspiring Minds) : Launched by Ministry of Human Resource Development. To provide the best teaching-learning resources to all. To bridge the digital divide for students who remained untouched by the digital revolution and have not been able to join the mainstream of the knowledge economy

Diksha Portal: It was launched by the Ministry of Human Resource Development, For providing a digital platform to the teacher to make their lifestyle more digital. Through this portal, all teachers across the nation will be equipped with advanced digital technology.

Apps launched by the Central and State Government

Apna Kangra App: Chief Minister of Himachal Pradesh, Jai Ram Thakur has launched the Apna Kangra App. To grant a hassle-free experience to the tourists and enhance the sale of local handicrafts.

14400 app : Launched by the Andhra Pradesh Chief Minister – Jagan Mohan Reddy. This app has been developed by the Anti-Corruption Bureau. This app will help the people of Andhra Pradesh to register corruption-related complaints against the officials in the State.

Rozgar Bazar App: This app was launched by the Government of Delhi. To provide employment opportunities to the people during covid pandemic.

KISAN mobile Application: IIT Roorkee launched the KISAN mobile app in Uttarakhand. This app was developed by Dr. Khushboo Mirza. This app will provide the weather forecasts and weather-based information to the farmar. The program was conducted as the part of ‘Gramin Krishi Mausam Sewa’ (GKMS) project

Digital Sansad App: Lok Sabha Speaker Om Birla launched this app in January 2022 during the budget session. This app will allow citizens to access live proceedings of the House.

CM Support App: This mobile App was launched by the CM of Jharkhand Shri Hemant Soren  to facilitate two-wheeler vehicle owners during the pandemic. It will provide  beneficiaries those who are below poverty limit to receive a subsidy of Rs 25 per liter i.e. Rs 250 per month for a maximum of 10 liters of petrol per month for two-wheelers.

Chalo Mobile Application and Chalo Smart Cards : Tourism and Environment Minister of Maharashtra launched this app. Both the initiatives were launched to facilitate digital and advance purchase of Brihanmumbai Electric Supply and Transport (BEST) bus tickets.

Call your Cop’ Mobile App: This app was launched by Nagaland Police. The app will allow the people of the state to get in touch with the police directly with just a single click via the app.

Fishwaale’ App : Assam’s Minister for Fisheries, Environment, and Forest and Excise, Parimal Suklabaidya has launched this app. The app is a one-stop solution for aquaculture which will be beneficial to both buyers and sellers. It will work as an e-marketplace for fish buyers and sellers..

‘PROOF’ App: This app was launched by the Lieutenant Governor of Jammu and Kashmir, Manoj Sinha. The main objective of this app is to monitor the work progress of all the projects allocated to different departments of the UT and ensure timely completion of these projects. With this app citizens of the UT can click the image of the work progress of the projects and geo-tagged photographs can be uploaded.

M-Yoga App: This app was launched by Prime Minister Narendra Modi. The app will be comprised of yoga training videos in different languages for people across the world

HIT (Home Isolation Tracking) COVID App : Launched by the CM of Bihar, Nitish Kumar. To monitor and track the home isolated COVID-19 patients across the state. As we know the maximum migrant worker was from Bihar. Those who have gone back to Bihar during the COVID pandemic.

SUPACE app: The Supreme Court of India has launched its Artificial Intelligence portal “SUPACE” (Supreme Court Portal for Assistance in Courts Efficiency). Through this portal, the SC intends to leverage machine learning to deal with the vast amounts of data received at the time of filing of cases.

MANAS App: It was launched by Principal Scientific Advisor K Vijay Raghavan To promote mental wellbeing across all age groups in India.

E-Chhawani Portal and Mobile App :  This portal was launched by the Union Defence Minister, Rajnath Singh. To provide online civic services to the residents of Contentment Boards across India.

Udyam Sarathi App: This app was launched by the CM of Uttar Pradesh, To avail information related to self-employment and job vacancies in industries of the state.

‘MANI’ (Mobile Aided Note Identifier) : This app was launched by Reserve Bank of India To help visually-impaired people to identify the denomination of currency notes.

‘Digicop’: This mobile app was launched by Chennai Police, To help report thefts of mobile phones and two-wheelers and check if they have been recovered.

UMANG App:  This app was launched by the Ministry of Electronics and Information Technology and National e-Governance Division. It is a single platform that provides services to all Indian citizens from Central to Local Government bodies as well as Private Organizations.

cVIGIL:  Launched by Election Commission of India ,To enable citizens to report on violation of election code of conduct.

BOLO App: Launched by Google to help students with their reading and comprehension skills and will help them read out aloud in English and in Hindi.

If you had learn from this blog comment us below, and suggest us which more article should we cover for the competitive exams. We are listing some of the important current affairs topic for you.

Monthly Current affairs of May 2022 with one liner pdf