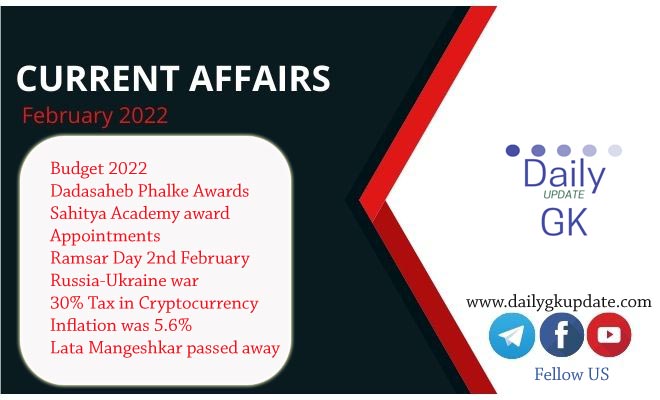 Check out the One liner’s current affairs of February 2022. It covers completely all the important events that  happened in February. It is hard to go through all the current affairs in detail during the revision. At this insistence this one liner current affairs will be a great help to the aspirant preparing for the government exam and general awareness for all the exams like SSC, Railways, UPSC or the State PCS.

In this blog, topics of current affairs like important appointments, current Affairs from the Sport section, Important days that were observed during this month with complete details and the awards that were given during February 2022 are compiled under the single blog with the PDF.

One liner Current Affairs of February 2022

National and International news are filtered by the expert teachers of our team. Who have gone through the daily analyses  of this month and only the important ones with their static parts are put on it, which are also given for complete revision at the last moment.

On 1st February 2022 Nirmala Sitharam presented her third budget. This year there were no question hours nor Zero hours.

Important Days of the February 2022

Awards Given on February 2022

All the Appointment in February 2022