Current affairs is the most important part in the government exams like SSC and Railways from the General Awareness section. It has been seen in the past trend of exams that the maximum number of the questions in the General awareness are asked from this section. So all the students who are preparing for this kind of exam have to read the current affairs on daily bases, but some students don’t get time for the daily current affairs. For that kind of student we have created this short one liner monthly current affairs of December 2021.

It will be useful for exams for all competitive exams UPSC, SSC, IAS, Railway-RRB, UPPSC, MPPSC & Other State Government Jobs / Exams and latest Current Affairs 2021 for banking exams SBI Clerk, SBI PO, IBPS PO Clerk, RBI, RRB and more. Keep reading current affairs and GK facts updated on a daily & monthly basis on this page. Stay aware about the recent happenings in the country and across the world and sharpen your preparation for the upcoming govt. exams. 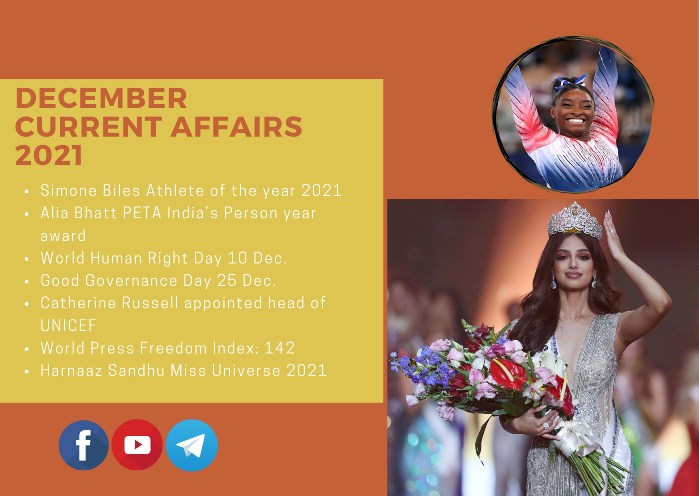 Appointment in the Month of December 2021

Important Days of December and their themes

Important Awards given in December 2021

Sport Current Affairs of the December 2021