The river system of India 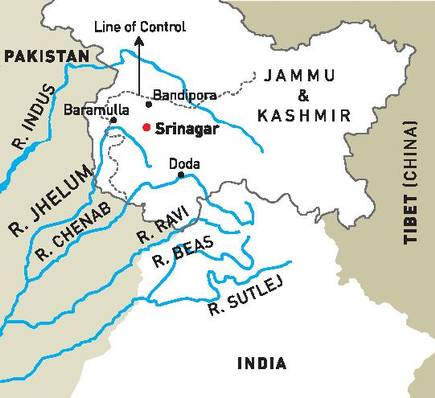 The total length of this river is 2880 km, in India it is 1114 km.It originates from Bokhar Chu, a glacier of the Kailash Range in Tibet near Lake Mansasororver. The Indus only flow through Jammu and Kashmir in India.

The Gilgit, Garting, Zaskar, Dars, Shiger, Hunza are the Himalayan tributaries of the Indus.

They all originate in the Sulaiman ranges. The rivers flow southward and receive “Panjnad” a little above Mithankot. The Panjnad is the name given to the five rivers of Punjab, namely the Satluj, the Beas, the Ravi, the Chenab and the Jhelum. It finally discharges into the Arabian Sea, south of Karachi.

The Jhelum is an important tributary of the Indus, arises from a spring at Verinag situated at the foot of the Pir Panjal in the south-eastern part of the valley of Kashmir. Jammu Kashmir is on the bank of the Jhelum river. It joins the Chenab river near Jhang in Pakistan.

The Chenab is the largest tributary of Indus. It is also known as the Chandrabhaga because it is formed by two rivers, Chandra and Bhaga, which joins at Tandi in Himachal Pradesh.

The Ravi is another important tributary of the Indus. It rises west of the Rohtang pass in the Kullu hills of Himachal Pradesh and flows through the Chamba valley of the state. Before entering Pakistan and joining the Chenab near Sarai Sindu.

It originates from the Beas Kund near Rohtang pass at an elevation of 4000m above mean sea level. The river flows through the Kullu valley and forms gorges at Kati and Largi in the Dhaloadhar range. It enters the Punjab plains where it meets the Satluj near Harike.

The Satluj originates in the Rakas lake near Mansarovar in Tibet. It almost flows parallel to the Indus for about 400 km before entering India, and come out of a gorge at Rupar. It passes through the Shipki La pass on the Himalayan ranges and enter the Punjab plains.

India has control over these rivers.

Pakistan has control over these rivers. 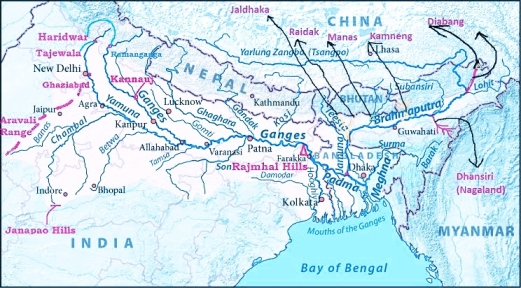 The Ganga is the most important and the largest river of India. It originates as Bhagirath from the Gangotri glacier in the Uttar Kashi district of Uttarkhand. The total length of the Ganga river from its source to its mouth is 2525 km, 2510 km in India and 15 km in Bangladesh. 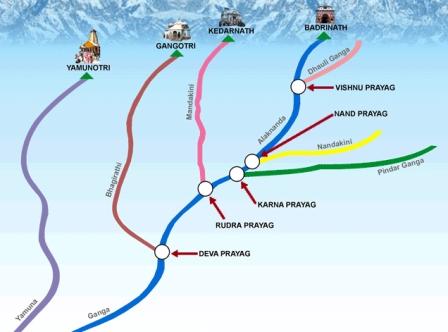 The Alaknanda is the main river of the Dev Prayag, it originates from the Satopanth glacier above Badrinath. The Alaknanda consists of the Dhauli and the Vishnu Ganga which meet at Joshimath or Vishnu Prayag.

The other tributaries of Alaknanda from beginning to end are as follow Nandakini river joins Alaknanada and form Nand Prayag, Pindar ganga joins it at Karna Prayag while Mandakini river meets it at Rudra Prayag, And at last Bhagirathi joins the Alaknanda at Devprayag and form the river Ganga.

The Ganga enters the plains at Haridwar. It flows through Uttarakhand, Uttar Pradesh, Bihar and West Bengal.

At Farraka, it bifurcates into Bhagirathi and Hugli river in West Bengal and Padma and Meghna in Bangladesh. The main branch of the Ganga river is known as the Padma in Bangladesh.

Before entering the Bay of Bengal, the Ganga along with the Brahmaputra forms the longest delta of the world, known as the Sundarbans Delta.

The Yamuna is the westmost and the longest tributary of the Ganga, it comes out of the Yamunotri glacier on the western slopes of Banderpunch range. It joins Ganga at Prayag ( Allahabad). It is joined by Chambal, Sind, Ken and Betwa on its right bank. Its left bank tributary is Hindan, the Rind, the Varuna etc.

The Chambal rises near Mhow in the Malwa plateau of Madhya Pradesh and flows northwards to the Kota, Rajasthan, where the Gandhisagar dam has been constructed. The Chambal River moves into Uttar Pradesh and runs for around 32 km before meeting the Yamuna River in Etawah district of Uttar Pradesh.

Gandak comprises two streams, namely Kaligandak and Trishlganga. It rises in the Nepal Himalayas between the Dhaulagiri and Mount Everest and drains the central part of Nepal. It enters the Ganga plains in the Champaran district of Bihar and joins the Ganga at Sonpur near Patna.

The Ghaghara river originates in the glacier of Mapchachungo, comes out of the mountain, cutting a deep gorge at Shishapani.

The Kosi raise from the north of Mount Everest in Tibet, where its mainstream Arun rises. After crossing the central Himalayas in Nepal, it is joined by the Son Kosi from the west and the Tamur Kosi from the east. It forms Sapt Kosi after uniting with the River Arun.

The Damodar river occupies the eastern margins of the Chotanagpur plateau where it flows through a rift valley and finally joins the Hugli.

The Mahananda is another important tributary of the Ganga rising in the Darjiling hills. It joins the Ganga as it left the bank tributary in West Bengal.

The Brahmaputra is one of the largest rivers in the world, with a total length of 2900 km. It originates from the Chemayungdung glacier of the Kailash range near the Mansarovar lake in Tibet. It is known as Tsangpo in Tibet, which means “the purifier”.

In the north-eastern parts of Assam valley, it is joined by two important tributaries, the Dibang ( Sikang ) from the north and Lohit from the south. The Brahmaputra bends southwards and enters Bangladesh near Dhubri in Assam.

The Padma is joined on the left bank by the Meghna originating in the mountainous region of Assam. From the confluence of Padma and Meghna which makes a very broad estuary before entering the Bay of Bengal.