This article provides  the list of India companies and their chief executive officer CEO  such as managing director (MD), and the current  positions they are in. This list contains the names of all the big companies and their CEO both the Indian and the foreign companies  general, which is asked in the government competitive exams. In the previous Railway ALP and Group D exam a number of questions were asked from this section. This list contains the most expected CEO name that can be asked in the upcoming government exams.

We have separated the list of CEO and MD into various categories which help you choose the most important and most expected name that can be put on competitive exams. 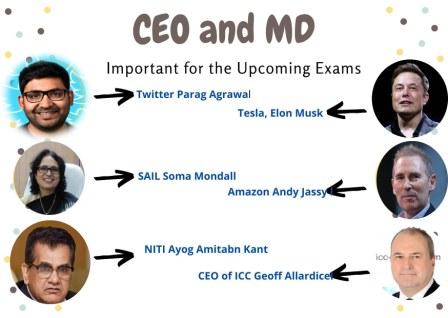 Important CEO name that can be  asked in  exams.

It is also important in the part of current affairs part of the exams in the recent appointment section.

CEO and Chairman of the Government Institution.

All the CEO and Chairman of the Banking institution of India.

Student those who are preparing for the Banking exams like IBPS PO and Clerk and SBI PO. This is one of the most important part of the article for them to know the Chairman and MD of all the Banks of India.

RBI regulate all the Banks of India and it heads as follow:

Big Indian Companies and there CEO.

FAQ from the topic of CEO and MD

Who was the first woman managing director and CEO of the National Stock Exchange?

Chitra Ramkrishna was the first female MD and CEO of NSE. she was born in 1963 and become the MD in 2013.

Who was the first CEO of NITI Aayog of India?

Sindhushree Khullar as the first CEO of the NITI Aayog. NITI Aayog came in the place of Planning commission in 2015.

Who was the first Governor of RBI?

Sir Osborne Smith was the first Governor of the Reserve Bank. And the first Indian Governor was Chintaman Dwarkanath Deshmukh.

Who was the first director of DRDO?

Avinash Chander was the first director of DRDO. It was formed in the in 1st January 1958.