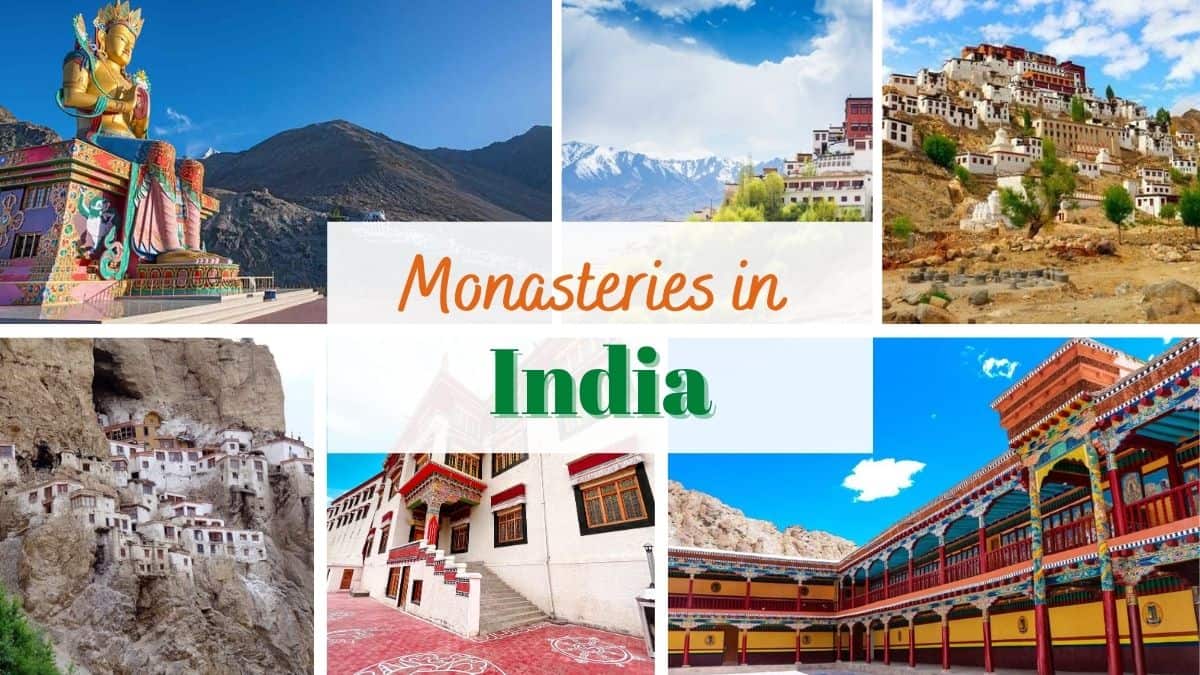 Some of the most famous monasteries are listed below.

Monasteries to important to know around India.

There are hundreds of monasteries around India, so the name and location of all these monasteries is not so important. So we have listed down the most famous and important monasteries that are important from the competitive exams point of view.

The Thiksey monastery is located 20 km from Leh at a height of 11,800 ft. The architectural layout of this monastery is truly great. It is one of the most beautiful monasteries in India. After the building of a monastery in that region, the monk paladin decided to build a monastery in Thiksey. The statue of Buddha in the monastery is 49 ft tall.

Most of the parts of the monastery are filled with paintings including walls and ceilings. A number of caves encircle the monastery and thus it is also known as the ‘Ajanta of the Himalayas’. These caves are used by the Lamas for meditation as they provide extreme solitude.

It is located in  the Mysore district of Karnataka, this monastery was established by Pema Norbu Rinpoche.

This monastery is home to more than 5000 lamas from across the world. His Holiness Pema Norbu Rinpoche takes care of the monastery, all by himself. Even the expenses for the entire monastery are also managed by His Holiness.

The Ghum or Ghoom Monastery is located at about a distance of 6km from the Darjeeling town. The monastery can be easily reached from the Ghoom Railway Station and it serves as one of the main tourist attraction points in Darjeeling.

There is a huge  statue 15 feet of Lord Buddha in this place. It is covered in gold and precious stones. On the front side of the statue, two large oil lamps burn constantly.

It is located in the Zanskar region of Jammu and Kashmir. When you go there you will be amazed to see the small huts, made up of muds and wood built, just look like the shape of Honey-comb.

The entire monastery is built on the mouth of a cave and hence the name Phuktal was given to this monastery; in native language, ‘Phuktal’ means ‘through caves’.

The 12 storey complex of the Thiksey Monastery covers an entire side of a hill and the white colour of the monastery makes it look like a small whitewashed town consisting of many numbers of small buildings.

It was established around the 14th century, the Diskit Monastery is located in Leh. It is the oldest and also the largest monastery in Leh. The Diskit Monastery belongs to the ‘Gelugpa’ sect. This sect is also referred to as the ‘Yellow Hat’ sect of Buddhism. It was founded by Changzem Tserab Zangpo, who was a disciple of Tsongkhapa.

The Diskit monastery is highly influenced by Mongol mythology which depicts the life of an evil and anti-Buddhist monk.

The monastery itself is very magnificent and the large statue of the Jampa Buddha makes the monastery more impressive. The statue measures 32 m and is located on the top of a hill.

It is located in the mountain range of  Kanchenjunga in Gangtok. The Enchey Monastery is surrounded by dense forest; mostly pine trees.

A Buddhist tantric master, Lama Druptob Karpo; a master in the art of flying is believed to be the founder of this monastery. During one of the journeys to Maenam Hill, Karpo took a rest in this place for a few days and built a small shelter for resting. Years after the visit of Lama Druptob Karpo, construction of the Enchey Monastery started in the very same spot as a remembrance of the master of flying. The construction was completed in 1901.

The monks in this monastery organise the ‘Chaam’ festival. This festival is very close to the inhabitants of Gangtok and also attracts thousands of tourists and monks from other Buddhist monasteries around the world. The ‘Singhe Chaam’ is celebrated once in every three years and is the main attraction of the Chaam festival.

During this period, Gautam Buddha is believed to have turned the wheel of Dharma for the first time. ‘Pang Lhabsol’ and ‘Lhabab Duchen’ are also widely celebrated in this monastery.

Rumtek monastery is the largest and the most visited monastery in the entire region of Sikkim. This monastery was founded in Tibet during the 9th century. Later, in the early 1960s, the monastery was re-established in India.

The monastery is located at Bomdila pass in Arunachal Pradesh. Throughout the year visitors come here to see its beauty covered with snowy mountains.

Cultural festivals are an integral part of the Tawang Monastery. Among all the festivals celebrated in this monastery, ‘Losar’ is the main festival. This festival is celebrated to mark the Tibetan New Year and it runs for 15 continuous days. The victory of good over the bad is depicted in this festival.

It is located in the foothills of the Himalayas in Dehradun. It is one of the major Buddhist  monasteries of the Nyingma School in Tibet and was founded in 1676. Rigzin Terdak Lingpa, whose ancestors are also known as ‘Nyo Lineage’, is the founder of the Mindrolling Monastery. The name ‘Mindrolling’ means ‘Place of Perfect Emancipation’. This monastery is also considered as one of the largest Buddhist Viharas in India.

The Tsuglagkhang complex is the residence of the Tibetan spiritual leader, Dalai Lama. The complex is located near Mcleod Ganj and is surrounded with beautiful forests of pine trees. The Dhauladhar Mountain ranges mainly comprises these forests.

The monastery also has a museum, Namgyal Gompa, Kalachakra temple and many more sacred paintings of Buddhist culture. The entire monastery is open to the visitors; there are no restrictions on visiting any part of the monastery.

The Kye Monastery is one of the oldest monasteries in the Spiti Valley. In the year 2000, it completed 1,000 years

Located at a distance of 12 km to Kaza, this monastery stands 4,116 m above sea level. Since its establishment, it has faced several attacks from the Mongols. And, due to repetitive reconstruction, the monastery looks like a fort today.

The Gondola Monastery is located inTupchiling village of Himachal Pradesh. It lies at a distance of 18 km from Keylong. At this place Chandra and Bhaga River meet.

The foundation of this monastery lies in the 8th century. Guru Rinpoche or Padmasambhava founded this monastery. Even before this monastery was founded, evidence of the existence of Buddhist culture has been found within this place.

It is located in the Kangra Valley of Himachal Pradesh.The Palpung Sherabling Monastic Seat is spread over a tranquil pine forest of 30 acres, this Buddhist monastery has snow covered mountains as the backdrop.

We hope this article was helpful for you in your preparation. Now you have all the required information about the monasteries around India. If you want to give some feedback that is welcomed, feel free to comment down your suggestion or feedback.