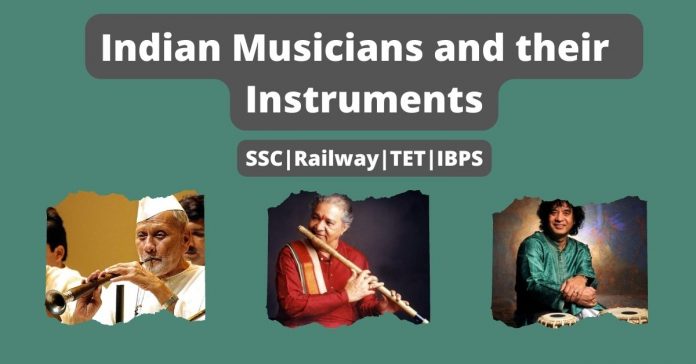 We have listed below the most famous Indian musicians and the type of musical instruments they play. In the art and culture section of the General knowledge (GK) question comes from this topic. In the competitive exams like SSC, Railway, Banking and other state level exams, this is an important topic to go through.

Some of the famous Indian classical musicians of all times.

He was an Indian musician who played the Shehnai, a type of woodwind instrument. It is he who is credited with popularising the shehnai. That is why it got the title of ustad Bismillah Khan. He learned to play Shenai from his uncle, Ali Baksh. In 2001 he was awarded the Bharat Ratna, and the country observed a national day of mourning following his death in 2006.

Pandit shivkumar Sharma was an Indian classical musician and Santoor player. He is credited for popularising the Santoor world wide.

He passed away recently on 10 May 2022 due to kidney-related issues and cardiac arrest.

Pandit Ravi Shankar is an Indian musician associated with playing Sitar. He was music composer and the founder of National Orchestra of India.

He was awarded India’s highest civilian honour, the Bharat Ratna in 1999.

He was an Indian music director and one of the great classical flautists, who plays the flute, in Hindustani classical tradition.

He was awarded with Padma Bhushan in 1992 and Padma Vibhushan in 2000.

Zakir Hussain is an Indian tabla player, composer and music producer. He is the eldest son of tabla player Alla Rakha. He was awarded the Padma Shri in 1988, and the Padma Bhushan in 2002.

Listed below are the various types of musical instruments along with famous Indian musicians associated with them.

Questions related to musicians and their instruments, asked in various exams.

Pandit Shiv Kumar Sharma passed away recently, he is related to which musical instrument?

Ustad Bismillah Khan is associated with which musical instrument?

Amjad Ali Khan is associated with which musical instrument?

Alla Rakha Khan is famous for which musical Instrument?

M.S. Gopala Krishnan is famous for which musical Instrument?

Pandit Ravi Shankar is associated with which musical Instrument?

Totaram Sharma is associated with which musical Instrument?

R.K Bijapure is associated with which musical Instrument?

Dams in India and their Importance