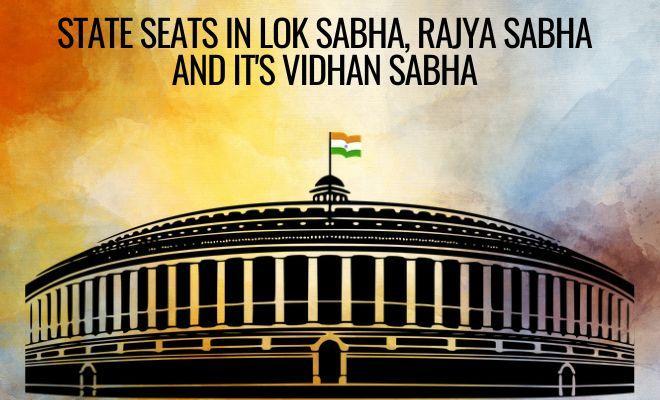 If you are an aspirant of the Government competitive exams, you need to know the number of seats sanctioned to the different states of India. This topic is part of Indian Polity of General Awareness (GK) Many times in the exams it has been seen, in which the question related to the allocation of the seats in the houses are asked. So if you are preparing for the SSC, Railway, Banking or teaching exams it is a must to know this topic.

In this article we will discuss the Lok Sabha, Rajya Sabha, Vidhan Sabha (State legislative assembly) and the Vidhan Parishad (State legislative council) and the number of seats allocated to the different States in India by the constitution of India.

Lok Sabha and their Number of Seats

In the Lok Sabha there are a total 543 members elected and 2 members are nominated by the President of India from the Anglo-Indian community. But now by the 104th constitutional Amendment Act, 2019 the nomination of two anglo-Indians is abolished from January 2020.

Every Citizen of India above 18 year of age can take part in the election of the member of Lok Sabha. The constitution provides that the maximum strength of the Lok Sabha be 552 members. The number of the Lok Sabha Seats  varies with different states, seats are allotted in the respect of the population of the State.

The constitution of India limits the number of elected members of the Lok Sabha to 530 from the states and 20 from the union territories, allotted according to their population.

Members of the Lok Sabha serve for terms of five years, unless the house is dissolved before that.

Rajya Sabha and their Number of Seats

The Rajya Sabha (Council of States) or the upper house is a permanent body, so it cannot be dissolved. One third of the members retire every second year, and are replaced by newly elected members. Each member is elected for a term of six years. Its members are indirectly elected by members of legislative bodies of the states. The Rajya Sabha can have a maximum of 250 members. It currently has a sanctioned strength of 245 members, of which 233 are elected from states and union territories and 12 are nominated by the president. Of these members, 12 are nominated by the president from the field of  literature, science, art, and social service, and the balance are proportionally elected by the state legislative assemblies.

The number of members from a state depends on its population. The minimum age for a person to become a member of the Rajya Sabha is 30 years. There is no upper age limit.

Each Member of the Legislative Assembly (MLA) is directly elected to serve 5-year terms by single-member constituencies. The Constitution of India states that a State Legislative Assembly must have no less than 60 and no more than 500 members however an exception may be granted via an Act of Parliament as is the case in the states of Goa, Sikkim, Mizoram and the union territory of Puducherry which have fewer than 60 members.

Here in the table below the number of seats allocated in the houses of all the state of India is given in tabular form.

Seats in Union Territory of India

Note: – means the there is no seats in that house.

State with Legislative Council in India.

The tenure of the MLCs is six years. One-third of the members of the State Legislative Council retire after every two years. It works the same as the Rajya Sabha, the upper house of the Parliament of India.

As of 2022, 6 out of 28 states have a State Legislative Council. These are Andhra Pradesh, Karnataka, Telangana, Maharashtra, Bihar, and Uttar Pradesh

Number of the seats in the legislative council

West Bengal is looking toward the creating it’s Legislative Council

To get the complete information about the seats allocation of Lok Sabha and Rajya Sabha and Vidhan Sabha of the State download the pdf file.

How many seats are there in Lok Sabha and Rajya Sabha?

In the Lok Sabha there are a total 543 members elected and the maximum number of the Lok Sabha member can be 552. But now the 2 seats will be reduced as the anglo-Indians have been removed.
In Rajya Sabha total number of 245 but it can be maximum upto 250 members can be elected. The 12 members are nominated by the President.

From which field does the president nominate the members in Rajya Sabha?

President of Indian nominate 12 members in the Rajya Sabha from the field of literature, science, art, and social service

Which state has the highest seats in Lok Sabha and Rajya sabha?

Uttar Pradesh has the highest number of seats in all the houses. It has 80 seats in Lok Sabha, 31 seats in Rajya Sabha and 403 seats in the Vidhan sabha.