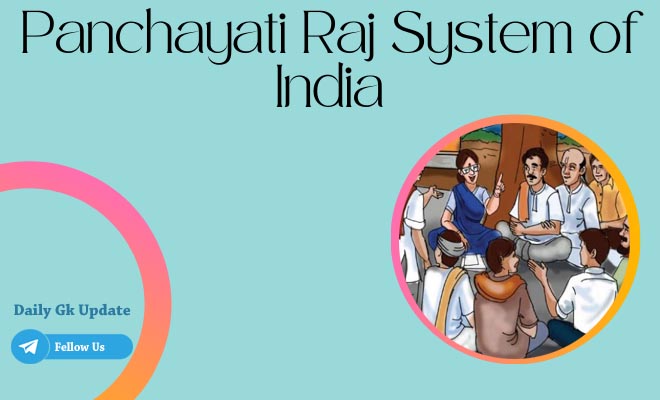 The Panchayati Raj System in India is like the local self government. Where people of the village elect their representative (Gram Sabha). It was the dream of Mahatma Gandhi to established the local Governing body for the economic development of villages and Panchayats.

The development of the village was the immediate problem faced by our country after independence. Hence the Community Development Program was launched in 1952 with a view to carrying out the integral rural development work.

Rajasthan was the first state to set up the Panchayati Raj System in 1959 followed by Andhra Pradesh.

Panchayati Raj is one of the important topics of the various competitive exams. In the polity section Local self Government is in Syllabus. Various GK questions are asked in exams like SSC, Railways and UPSC.

Article of the Panchayati Raj System

The Act added Part IX to the Constitution, “The Panchayats” and also added the Eleventh Schedule which covers the 29 functional items of the panchayats. It is mentioned under the State List.

The Amendment Act provides shape to Article 40 of the Constitution, which is the part of directive principles of state policy, which directs the state to organize the village panchayats and provide them powers and authority so that they can function as self-government.

Structure of Panchayati Raj in India

1. Gram Panchayat at the Village level

Gram Sabha means a body consisting of persons registered in the electoral roles relating to a village level.

2. Panchyat Samiti at the Block Level

3. Zilla Parishad at the District level

Election of the Panchayati Raj of India.

Any Adult who has attained the age of 21 can contest in elections to Panchayats. There is no upper age limit.

Voting age is the same as the other elections. Those 18 year and above can take part. Only person belong to the same panchayat can vote.

Reservation of Seats in Panchayats

There is the reservation for the seats in panchayats for the ST and SC communities in the panchayats in all the tiers of tiers in the ratio of their population. Women of this community have a special reservation.

The state legislatures are also given the provision to decide on the reservation of seats in any level of panchayat or office of chairperson in favour of backward classes.

Power and Function of the Panchayat

The state legislature may give the Panchayats such powers and authority as may be necessary to enable them to function as institutions of self-government. In many schemes panchayats are given power to monitor the functioning of the work. Like in MANREGA, panchayats have power to inspect the work.

They are the local authority of the villages. Many documents related to the identity and land need their sign and approval.

What is the panchayati raj system?

Panchayati raj system is the local self governing body of India. In which the local representative of the village and community takes part in the development of the locality.

What is the importance of Panchayati Raj?

Which committee recommended the panchayati raj system in India?

When was the panchayati raj system introduced in India?

The Panchayati Raj system was introduced in India by the 73rd Constitutional Amendment Act of 1992.

Which state in India implemented the panchayati raj system first?

Rajasthan was the first state to set up the Panchayati Raj System in 1959 followed by Andhra Pradesh.

Who is known as the father of local self government in India?

Who introduced the panchayati raj system in India?

The system later came to be known as Panchayati Raj, which was inaugurated by the then Prime Minister Pandit Jawaharlal Nehru on 2 October 1959 at Nagaur in Rajasthan.

Which state in India has no Panchayati Raj institution?

All states of India have Panchayati Raj systems except Nagaland, Meghalaya and Mizoram, in all Union Territories except Delhi; and certain other areas.

Who is known as the father of Panchayati Raj?

Balwant Rai Mehta was a parliamentarian who is credited for pioneering the concept of the Panchayati Raj in India and was also known as the ‘Father of Panchayati Raj’.