The Peninsular River System of India

The main water divide in peninsular India is formed by the Western Ghats, which runs from north to south close to the western coast. Peninsular rivers are much older than the Himalayan Rivers.

Most of the major rivers of the peninsular such as the Mahanadi, the Godavari, the Krishna and the Kaveri flow eastwards and drain into the Bay of Bengal. These rivers make deltas at their mouths. Numerous small streams are flowing west of the Western Ghats.

The Narmada and the Tapi are the only long rivers, which flow west and make estuaries. The drainage basins of the peninsular rivers are comparatively small in size.

There is a total of five River basin in the Peninsular Rivers in India such as the Narmada, Tapi, Godavari, Mahanadi and the Kaveri river basin. 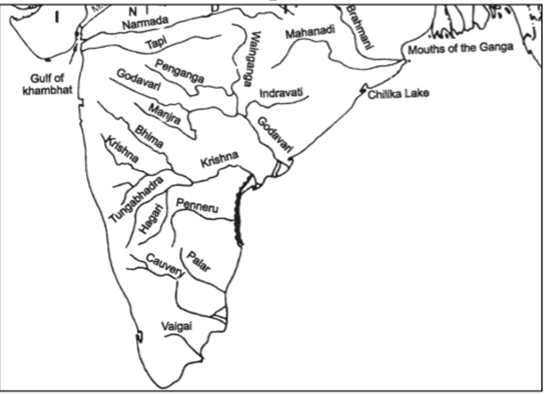 Rivers that drain into the Arabian Sea

The Narmada, the Tapi, the Mahi, Luni, Sabarmati flowing west as well as several small streams originating from the Western Ghats flow westwards into the Arabian Sea.

Rivers that drain into the Bay of Bengal

The Mahanadi, the Godavari, the Krishna, the Cauvery and several smaller rivers drain south-east into the Bay of Bengal.

Hydro Power Project in the basin:

Left Bank: The Bhima, the Musi and the Munneru.

The Bhima originates from the Matheron Hills and joins the Krishna near Raichur after for a distance of 861 km.

The Tungabhadra is formed by the unification of the Tunga and the Bhadra originating from Gangamula in the Central Sahyadri. Its total length is 531 km.

At Wazirabad, it receives its last important tributary, the Musi, on whose banks the city of Hyderabad is located.

Tungabhadra is a major inter-States project in the basin, To operate the project and to regulate the flows among the beneficiary States of Karnataka and Andhara Pradesh.

Tributaries of the Cauvery River:

Right Bank: Lakshmantirtha, the Kabbani, the Suvarnavati, the Bhavani, the Noyil and the Amaravati joins from right

The river descends from the South Karnataka Plateau to the Tamil Nadu Plains through the Sivasamudram waterfalls (101 m high).

During the pre-plan period, many projects were completed in this basin which included Krishnarajasagar in Karnataka, Mettur dam and the Cauvery delta system in Tamil Nadu.