Vice President is the Important topic of Polity. Many questions from this topic come in SSC Railways and all the competitive exams. All the students can go through this article. Our team of Daily GK Update tries to provide complete notes on the Vice President of India. It will be helpful for all of you.

Who is the Vice President Of India? 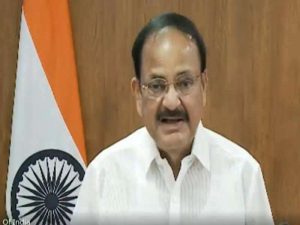 The Vice-President of India is elected by the electoral college by a single transferable vote.

The electoral college consists of all members of both Houses of Parliament, that is Lok Sabha and Rajya Sabha.

State Legislatures do not take part in the election of the Vice President.

He is the ex-officio Chairman of Rajya Sabha.

Qualification for elected as the Vice President of India.

Is a citizen of India and who has completed the age of 35 years.

He must be qualified for election as a member of the Rajya Sabha.

Must not hold an office of profit under the Government of India or a State Government or any subordinate local authority.

In case a member of the Legislature is elected Vice President, he had to vacate his seat in the House to which he belongs.

The term of the Vice President is 5 Years from the date on which he enters his office. He may be terminated earlier than the fixed term either by resignation or by removal.

A formal impeachment is not required for the Vice President’s removal.

Vice President can be removed by a resolution of the Rajya Sabha passed by an absolute majority (more the 50% of the total membership) and agreed to by a simple majority (50% of voting members) of the Lok Sabha [ Article 67(a)].

Power and function of a Vice President

He is the ex-officio Chairman of Rajya Sabha. In this capacity, his power and function are similar to those of the Speaker of Lok Sabha.

He acts as President when a vacancy occurs in the Office of the President due to his resignation, removal, death. Only for a maximum period of six months, within which election must be conducted.

When President is absent he can discharge his functions as the President of India.

If the offices of both the President and the Vice President fall vacant because of death, resignation, removal, etc, The Chief Justice of India or in his absence the senior-most judge of the Supreme Court acts as President.

For the first time, during the 15-day visit of Dr. Rajendra Prasad to the Soviet Union in June 1960, then Vice-President Dr. Radhakrishan acted as the President.

For the first time, in 1969, when President Dr. Zakir Hussain died and the Vice-President V.V. Giri resigned. The Chief Justice Md. Hidayatullah acted as President.