Vedic culture is an Important topic of history. Many questions are framed from the Rig Vedic period and also from the later Vedic culture. This article has details short notes for an exam like SSC, Railway, and other competitive exams.

Vedic culture started after the decline of the Indus Valley civilization.

They First settled in Punjab and called it Sapta Sindu a region of seven rivers.

The Vedic Literature was composed in Sanskrit. They were not in written form in beginning. They were taught by oral method, hence they were called Sruti (heard) and Smriti (memorized). But later on after the invention of Scripts, they were written.

The most important of Vedic literature is Vedas. There are four major Vedas. They are as below.

Rig Veda is the oldest text in the world.

They are divided into 10 mandals. Six mandalas from 2nd to 7th are called Gotra. The 1st and 10th mandalas were added later. 10th mandalas contain the Purushasukta which explains about 4 Varnas – Brahmana, Kshatriya, Vaishya, and Shudra. Gayatri mantra is in Rig Veda of 3 mandalas, it is addressed to solar deity Savitri.

The Saraswati or Naditarana is the best rivers in the Rig Veda.

Yajur Veda: Known as the book of sacrificial prayers. Has details of rules to be followed during the sacrifice.

Sama Veda: Has a collection of songs. This Veda is important for Indian music. It consists of 1549 verses.

Atharva Veda – Is known as the book of magical spells. It has a collection of spells and charms, which can cure evils and diseases.

Other Vedic texts were the Brahmanas (explains the meaning of sacrifices); Upanishads (also called Vedantas, 108 in number, source of Indian philosophy); and Aranyakas (books of instructions).

The Upanishades are Philosophical texts. They are generally called Vedanta, as they come towards the end of the Veda. There are 108 Upanishadas. Vrihadaranyaka is the oldest Upanishadas.

“Ashtadhayayi” written by Panini, is considered the oldest grammar in the world.

Nirukta is the oldest dictionary in the world.

There are mainly two Mahakavyas (epics).

Ramayana is written by the Valmiki. It is also known as ‘Adi Kavya’, it is the oldest epics of the world. At present, it consists of 24,000 shlokas, originally it has 6000 shlokas.

The Mahabharata is written by Ved Vayas. It is the largest epic in the world. At present, it consists of 1,00,000 shlokas, originally it has 8800 shlokas.

Bhagavad Gita is extracted from Bihshma Parvan of Mahabharata. 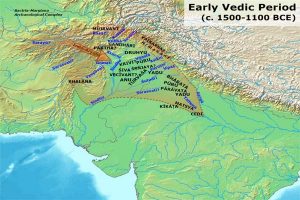 Rig Veda is the only source of knowledge for this period.

Rigvedic people lived in an area know as Sapta Sindu that is the region of the seven rivers, present in the Frontier Province of Punjab.

These seven important rivers that are mention as Sapta Sindu are:

The Dasrajan War ( the Battle of Ten Kings).

War was fought between 5 Aryan and 5 non-Aryan tribes against Bharata King Sudas in which the Bharata Won. They later joined with the Purus and established a new tribe called Kurus who ruled the upper Gangetic Plains. The Battle was fought on the bank of the Parushni (Ravi) river.

In the Early Vedic Age: Kula was the basic unit of political organization. Multiple families together of kingship formed grama. The Group of villages was called “Visu”, headed by ‘Vishavapati’. The highest political and administrative unit was ‘Jana’ or tribe.

Rig Veda speaks of two important assemblies, Sabha and Samiti. Sabha was a committee of few privileged and important individuals.3

Society was divided into four Varnas based on the occupations of the individuals.

The occupation had not become hereditary as they become, later on, members of the same family took to a different profession.

Child marriage was not there.

Father’s property was inherited by the son.

Milk and its products were an important part of the diet.

There was a Penalty of death or expulsion from the kingdom to those who kill or injure cows.

Aryans were mostly framer, the Number of Cows was term as their wealth.

Indra or Purandara (destroyer of the fort) is considered the most important god, known as the god of rain.

Agni is the second important god considered as the god of fire.

Savitri (the god of light), Gayatri Mantra is dedicated to her.

No temple and no idol worship were there.

Prayers were offered to gods for reward.

Various animals were domesticated, as the cows were medium of exchange.

Money and markets were known but they were not extensively used. Cows and gold ornaments of fixed value were the media of exchange. Coins were not known to them.

They were experts in surgery. Along with herbs and drugs charms and spells were regard as equally potential in healing diseases. 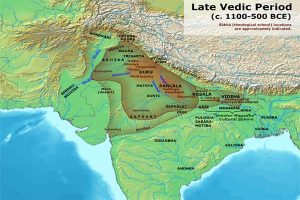 During this period Aryans sifted toward Northern India, toward the Ganga River.

There was growth in the power of the king.

The popular control over the affairs of the kingdom was exercised through Sabha and Samiti, as in the Rigvedic period.

Even during the later Vedic period, kings did not have a standing army.

The king played a great role in administering criminal law.

Aryans expanded to the east and south, group of people known as Kshatriyas emerged to conquer territories and administer them. The remaining Aryans formed a separate class known as Vaishyas, a word derived from Vis meaning ‘people’. The non-Aryans formed the fourth class known as Shudras.

The higher castes could marry with the lower ones, but marriage with Shudras was not permitted.

Women were prohibited to attend the political assemblies.

Prajapati (creator of the Universe, later known as Brahma) become the supreme God.

Pushana, who protected cattle in the early Vedic period now become the god of Shudras.

Towards the end of the Vedic period, there was the emergence of a strong reaction against cults, rituals, and priestly domination.

The land has now become more valuable than cows. Agriculture began to replace the rearing of cattle.

New metals like tin iron and silver were come to be known.