List of Major ports in India along with Pdf 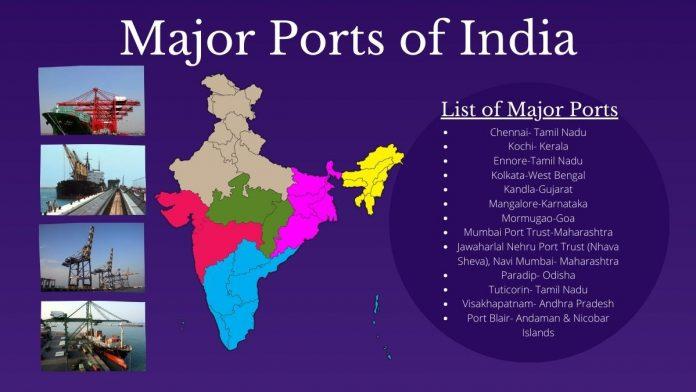 There are 13 Major Sea Ports in India and about 200 small sea parts are located all around the coast of India.All this ports are located in the coastal state of India that are: Maharashtra, Gujarat, Odisha, Tamil Nadu, Daman and Diu, Andhra Pradesh, Andaman and Nicobar Islands, Kerala, Karnataka, West Bengal, Ladshadweep, Puducherry and Goa.

These ports play a vital role in the import and export of goods in India. As the waterway is the cheapest way of transport of goods. There are many small and medium ports but 13 are the major ports, from where the maximum trade is done. In this article we will be discussing the brief information about the seaports of India.

This article will mainly focus on the competitive exams points of view. It will be helpful for the aspirant of the UPSC, State PCS and the lower level exams like SSC, Railways and banking exams.

India has 13 major seaports, which are most important from the import-exports point of views. Government is focusing on developing more ports in the coastal state, so that it can be  convenient for the states that are landlocked.

It is the busiest and the richest Sea Port in India, Kandla port is situated 90 kms from the Gulf of Kutch, Gujarat in a place called the Kandla creek. It was opened in 1965 and operated by Kandla Port Trust. Major goods imported from this port are Petroleum, Chemicals, Iron, Steel and Iron machinery and also handles salt, textiles and grain.

It is also known as Deendayal Port. Kandla was constructed in the 1950 as the chief seaport serving western India, after the partition of India and Pakistan. Kandla port was renamed as Deendayal port under the India port act of 1908.

Earlier this seaport was  known as Nhava Sheva Port.It is the largest container port of India. It is situated in the east of Mumbai, Maharashtra. The Jawaharlal Nehru port was awarded the ‘Port of the year’ at the MALA awards, 2014.

This port was constructed on May 26, 1989, the Jawaharlal Nehru port is entirely controlled by the Indian Government. This port handles 56% of the total containers of India.

It is the largest port in India.Located on the mainland of West Mumbai is the Mumbai port. It is a natural deep-water  harbour which is 10-12 metre deep. It handles around one-fifth of India’s foreign trade.

The Mumbai port is one of the busiest and Major seaports in India. It plays a vital role in enhancing India’s economy and trade affairs. The Mumbai harbour is also known as ‘Front Bay’, meaning gateway of India.

Mormugao Port is a port located in Goa and is the main port of Goa and plays a vital role in its trade affairs. This port is a tourist destination as Goa is known for the beautiful sea shores.  It was awarded the status of a major port in 1963, and it is the leading iron ore export location of India exporting a total of 50.02 million tonnes of iron ore every year.

Located at the southern tip of the coastal city of Mangalore, Karnataka. It is also an important port in India. This port is also known as  Panambur Port is one of the major seaports in India. It is situated on the Gurupura river at its northern banks.

Indira Gandhi, the former Indian prime minister, had inaugurated Panambur port formally on the 4th of May, 1974.Panambur Port is a deepwater, all-weather port. This means that it can function throughout the year. It primarily serves as a trading point for the majority of Karnataka and Kerala.

A major port on the Arabian Sea,It is located on the sea route of the Arabian Sea and the Indian Ocean. The Cochin port is one of the largest seaports in India and also the fastest-growing one situated in Kerala.Cochin Port is also known as Kochi Port opened in 1928. The Cochin port lies in between two islands, namely Willingdon and Vallarpadam.

Its export mainly consists of tea, coffee and spices while its exports consist of mineral oil and chemical fertilisers. It is also a centre for shipbuilding. In this port, the imports always exceed exports.

Tuticorin Port is a new port that was recently constructed in Tamil Nadu and is one of the 13 major ports of India.This port is the southernmost major port of India. It is one of the major ports in Tamil Nadu and one of the largest container terminals in India. This port is also known as Chidambaranar port.It is an artificial harbour developed 8kms south of the old Tuticorin port. The port mainly trades with Sri Lanka and is correctly connected by railways and roads. It is also the second-largest port in Tamil Nadu. It is best for pearl fishery in the Bay of Bengal and is also known as the pearl city.

The port handles the trade of coal, food grains, salt, sugar, petroleum products and edible oils and carries out major trade with the neighbouring country of Sri Lanka.

The Chennai port,  also known as the Madras port is the second-largest port in the whole of India. It is the third oldest port in India that started its operations in 1881. It lies on the Coromandel Coast in the Bay of Bengal and is Tamilnadu’s principal port and is the primary reason for its stability.It is a coastal Breakwater large seaport.

It is located 24 kms from the Chennai port on the Coromandel coast, the Ennore port is the 12th major port of India. This port is renamed as Kamarajar port. The port has both road and railway links to ease transport. It mainly deals with the transportation of coal, and that was its initial cause of development being the Tamil Nadu electricity board needed fuel for its operations. Ennore Port is a privately owned port.

The Ennore port now deals with the handling of over 16 million tonnes of coal per year. Apart from coal it also deals with the trade of iron ore, petroleum products and chemicals. The prospects for this port are to build three multi-purpose berths and five containers.

Visakhapatnam Port is located in the East of India in Andhra Pradesh between Chennai and Kolkata port, this port is situated in a beautiful creek. It is one of the significant 12 major ports in India. Lord Willingdon inaugurated Visakhapatnam port on December 19, 1933.

The Visakhapatnam port has three principal harbours: the outer dock, the inner harbour and the fishing harbour. The port is located on a creek where the Narava Gedda joins the sea, a beautiful sight. The port deals with the trade of iron ore, pellets, coal, Alumina and oil.

The Paradip port is one among the deepwater seaports in India that are situated on the coast of Jagatsinghpur, Odisha. It was opened in 1966 and owned by the ministry of shipping.The depth of the port allows it to handle heavy and bulk containers. The artificial deep-water port located in Odisha is an important port on the eastern shore.

This port mainly deals with iron-ore and coal. Iron-ore is exported to Japan in vast quantities.

Coal, iron-ore and other dry cargoes are handled at the port. It has a cold handling plant, a railway system and a national highway that connects it to the road networks of the rest of the country.

Port Blair is situated in the Andamans and Nicobar island and is one of the recently developed major seaports in India. The government declared this port as a major one due to its contribution in boosting the ports of India to 13th place. The Port Blair port is the youngest sea port in India and is connected to the mainland of India through ship and flight. It helps in the trade with the south east asian nation.

The Kolkata port is situated on the bank of the river Hugli, it is the only riverine  seaport of India. It is just 128 kms from Bay of Bengal. This port handles all the goods coming mainly from Australia and South-East Asian countries. It is also known as the ‘Gateway of Eastern India’. The Kolkata port is the only port having two dock systems called Kolkata docks and Haldia docks. It is one of the largest dry docks of India and also the oldest port that was made by the East India company.

The Kolkata port is the most important port for the trade of jute. It exports Jute products, tea, coal, steel, iron ore, copper, leather etc. and imports are mainly that of machinery, crude oil, paper, fertilisers and chemical products.

Faq: Question that have is asked in recent exams

Which is the southernmost seaport of India?

Tuticorin Port, Tamil Nadu is the southernmost port of India. It carries out major trade with the neighbouring country of Sri Lanka.

Which seaport is the riverine seaport of India?

The Kolkata port is situated on the bank of the river Hugli, it is the only riverine  seaport of India.

How many major ports are there in India?

There are a total of 13 major seaports in India and around 200 small and medium ports are also there.

What is the new name of Kolkata port?

The name of Kolkata port was recently changed to Syama Prasad Mookerjee Port.